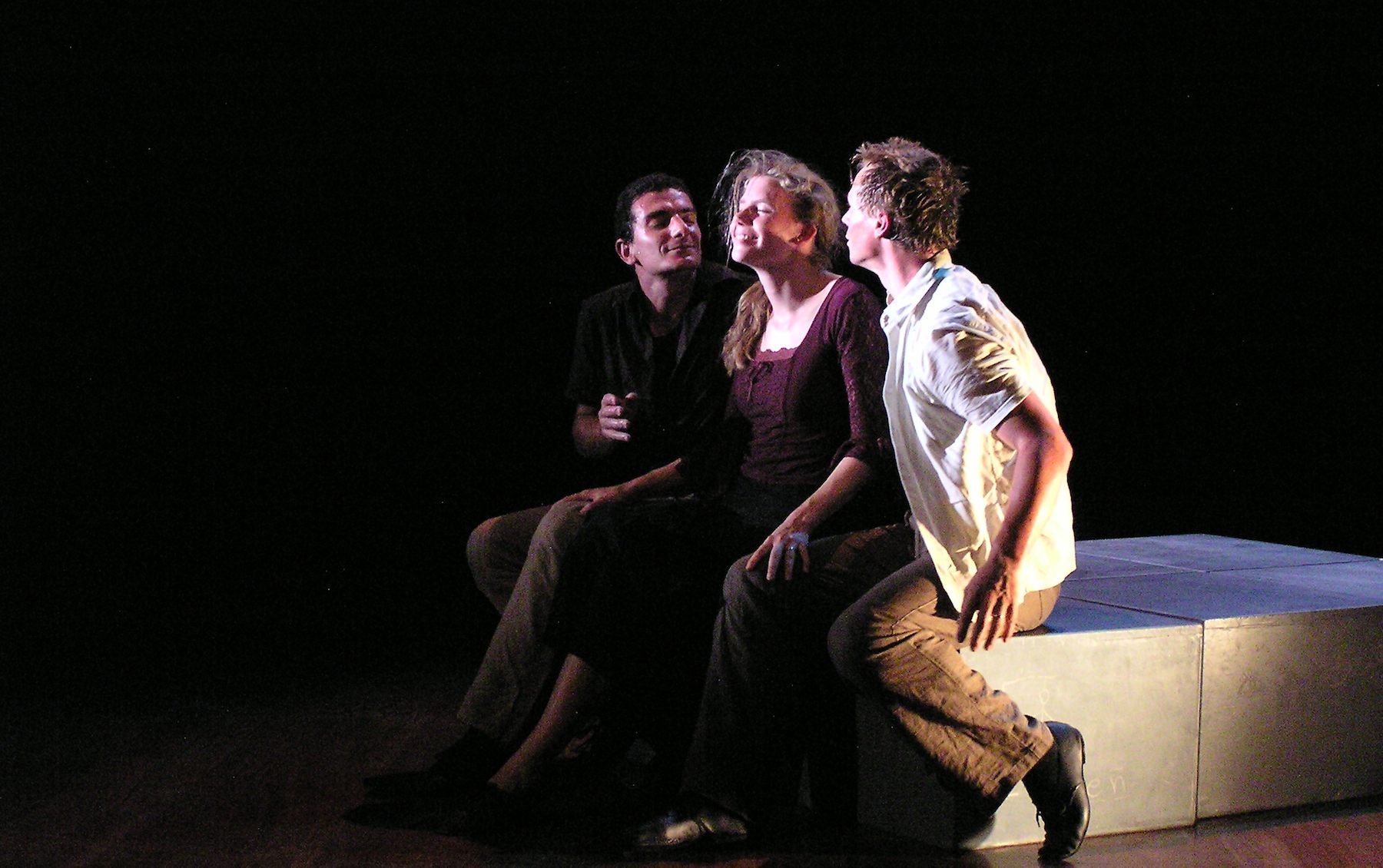 Since 2005, the CIA MOVEO creates and tours internationally productions that explore the narrative strength of the body and the expressive richness of the movement. Far from illustrating through gestures, far from an abstract plasticity of the body separated from theatricality, Moveo researches and works the development of a physical language that constantly seeks the connection between different disciplines.

Based in Barcelona, the company creates shows that, through a delicate body work and a great poetic imaginative, demonstrate the communication strength of stage and street. It also combines shows with workshops and activities for all audiences. Since its foundation, the company has been awarded several prizes, the most recent being the Best Performance Award (dance category) of the International Theater and Dance Fair of Huesca’15 (Spain), the Best Company Award of the Imaginarius’16 Festival in Portugal, and the Moritz Fira Tàrrega’17 Award for Best Street Art. The company has also been nominated to the Catalan Critics’ Awards 2017 and has won the Dansacat Award 2020.


Graduate in physical theater by the International School of Corporeal Mime of London where she also completed the postgraduate program in teaching and directing. She completed his training with courses in dance, circus and interpretation in Geneva, Paris, London, New York and Barcelona. She is director of MOVEO – creation and training center, where she also teaches and directs projects.

She was a member from 1999 to 2003 the company Théâtre de l’Ange Fou in London. Now acting and directing Moveo Teatro’s shows, touring with them for several theaters and festivals in Europe. Other activities include participation in conferences, film, and shows for organizations like Institut del Teatre de Barcelona, Universidad de Barcelona or Dies de Dansa, festival GREC de Barcelona.

Graduate in Philosophy from the University of Paris X and in physical theater, teaching and directing from the International School of Corporeal Mime of London. Artistic Director of MOVEO – creation and training center and teacher at the Escuela Superior de Arte Dramático de Barcelona and at t he Conservatorio Superior de Danza de Barcelona ( Institut de Teatre)
He was a member of the company Théâtre de l’Ange Fou in London for five years and since 2004 has directed and / or acted in 5 Moveo Theatre productions. In 2007, he directed the show Requiem which won the Special Jury Prize at the Theatre Festival in Barcelona. ARA in 2011! received the quality label E-Mix. His knowledge of mime and physical theater, has lead hime to direct projects, courses and workshops in various international organizations. He also directs projects for the Theatre Institute of Barcelona.


Graduate in French literature, he trained in physical theater and mime with Ivan Bacchiochi and Robert Bennett in Paris, and Steven Wasson and Corinne Soum at the International School of Corporeal Mime in London, from which he holds a diploma. He is a one of the founding members and actor of Moveo Teatro since 2005 and teaches at the Col·legi del Teatre de Barcelona and at the Moveo centre.

He was a member of the company Théâtre de l’Ange Fou in London and has since worked on various projects and short films as an actor. He has toured with shows in Croatia, Scotland, Spain, France, England, Israel and Poland. He has taught for various schools and organizations, and worked in collaboration with the Alliance Française of Port Said (Egypt), Glob’culture (France) and the French Institute of Barcelona.


She starts her artistic studies with theatre at Col.legi del Teatre and El Timbal of Barcelona. Later she dedicates herself to contemporary dance, studying in Barcelona and in Brussels with various teachers such as David Zambrano, Iñaki Azpillaga, Eulàlia Ayguadè, Thomas Hauert, Jozef Fruzek, Linda Kapetanea, and others. In 2014 she graduates in Choreography Studies (Institut del Teatre, Bcn). At the same time she is part of an annual laboratory with Pere Sais, working from “The art as vehicle” (Grotowsky).

She works in Barcelona during six years with the Company La Mandarina. Amongst other projects, she works with the choreographer Roberto Oliván in the movie Les derniers jours du monde; and with the Company Superamas in BIG 3rd Episode (happy/end). In Brussels she collaborates with Davis Freeman in Investment; and with Re-eject Re- Search cy Sara Vilardo. She also works as a movement assistant on different projects and for companies such as Cia Obskene and Cia Ignífuga.


Bachelor of Dramatic Art at the Institut del Teatre. She began her artistic training in a dance school doing several disciplines. She attended the Performing Arts Baccalaureate at the Celestí Bellera Institute, forming part of the Promotion that won the 2012 Buero Awards with the show Ubú Rei directed by Marta G. Otín.

She has worked at Bràvium Teatre, La Vilella Teatre, Teatre Tantarantana, Teatro Almacén or Llevant Teatre, among others. She has been part of Cia. Cocotte, with which he has toured Europe with the show ”Les Rois Fainéants”.

She is currently an actress of the Cia Moveo and studying Gestalt Therapy at the Gestalt Institute in Barcelona.


Currently actor of the company MOVEO; director of the show “Migrante” by Cia. Parece una Tontería, with which he has won several awards and which is touring nationally and internationally. In 2018 he creates with five other artists, the physical theater company Si Tu T’imagines.

He has worked as an actor under the direction of: Simone Beguinni, Renato Icarahy, Luizapa Furlanetto, Ole Erdmann, Juan Pablo Mazorra, Sophie Kasser, Olivier Décriaud, and Stéphane Lévy. Neilor was director of the show Why do you smoke so much, Lily? and participated as an assistant director in the theatre and cinema school CN ARTS, where he also worked as a teacher for five years.


Starts his training at the Dramatic Art School Eòlia before coursing a BA in Dramatic Arts at the Institut del Teatre de Barcelona, specialising in physical theatre. During his studies, he explores and extends both his interpretative and physical abilities.

Xavi has worked and performed in : Cruzando el límite by Xavi Gimenez, Herois by Pau Freixas and El Bruc by Daniel Benmayor. On Tv, he has participated in the serie La otra ciudad by Silvia Quer and other Tv series such as El cor de la ciutat, Tretze anys i un dia, Lo Cartanyà, Sagrada familia y Kubala, Moreno i Manchón. He also participates in the dubbing of Gran Torino by Clint Eastwood.

Xavi is a member of the Co. Moveo with Tu vas tomber! and the company The Chanclettes with which he tours the acclaimed show #Dputocool after having performed during six months at the theatre El Molino, in Barcelona.


Alma Steiner graduated from the Conservatori Superior de Dansa (Institut del Teatre – Barcelona) in Choreography and Dance Interpretation (2019) and sutdied at the Danish National School of Performing Arts in Copenhagen (2018).

Currently, She is touring her own devised piece premièred in 2019 at the Teatre Ovidi Montllor, “Wonder Fool World”

She has collaborated as a dancer in devised shows by choreographers like Lali Ayguadé, Sol Picó, Toni Mira, among others.


Graduated in Dramatic Art in the specialty of physicist at the Institut del Teatre de Barcelona. He has completed his studies at the Hamu Pantomime School in Prague.

He studies circus for five years in the Ateneu Popular of Nou Barris and in the School of Circus Rogelio Rivel. The first four years studying different circus disciplines and fifth specializes in acrobatics.

He is currently one of the members of Cia Cocotte, a finalist for the BBVA Theater Awards in 2016 and winner of the Move Awards with the show Les Rois Faineants.


Actress and singer. She holds a Diploma in Corporeal Mime and Physical Theatre from the Moveo Centre in Barcelona and studied dance in the school Área.

To complement her training, she has followed Jerzy Grotowski’s acting trainings by Javier Cárcel Hidalgo-Saavedra, studied contemporary dance with Cecilia Colacrai and Laura Vilar, eastern-tribal dance with Anna Lietchi and trained in improvisational theatre by “Julia’s League” for 5 years in Switzerland.

Since 2018 she is a member of the company Si Tu T’imagines based in Barcelona, touring with the show  “Sommes-nous?” and currently developing a new production, “It’s Easy”. She has performed in festivals such as the Festival Mutis of Barcelona, Festival Imaginarius in Portugal or the Theater Spektakel of Zürich. She is also a member of Cía Moveo, and is participating in the creation of “Echoes”.


Studied Dramatic Arts specialising in Physical Theatre at the Institut del Teatre de Barcelona, training with teachers such as Stéphane Lévy, Andrés Corchero, Moreno Bernardi, Renée Baker, Jordi Basora and Pere Jané among others. He continues his training participating in different workshops: Clown by Pep Massanet and Christian Atanasiu, Areal Dance with the Cie Deambulants, Street theatre with Albert Olivas and circus skills at the school El Galliner and Body Weather with Andres Corchero at the Espai Blanc Performing Arts Lab of Barcelona.